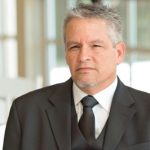 Steve has served the legal community in Central Florida since 1996, and is often recognized as a regional expert in legal investigations supporting both criminal and civil trial preparation.

Steve began his investigative career in the United States Army in 1986 as a Foreign Counterintelligence Agent. As an intelligence officer, Steve served in a wide variety of assignments worldwide, performing duties in fourteen countries in Europe and the Caribbean. He was responsible for intelligence operations, as well as the conduct and supervision of hundreds of investigations into matters regarding national security. Many of these issues involved suspected or actual incidents of espionage or sabotage. His most recent assignment was as the Senior Intelligence Representative to the Orlando Federal Bureau of Investigation’s Joint Terrorism Task Force. His citations and awards include numerous joint-service and United States Army decorations, including the Joint-Service Commendation Medal. Steve served as a Reserve Officer in the U.S. Army Reserves until 2011.

Since leaving Federal Service and entering private practice as a licensed investigator in Florida, he has successfully transformed his federal investigative experience to the civilian and corporate sector. Steve has adeptly applied the techniques used in government incident investigations to both civil and criminal investigations. He has become increasingly knowledgeable of complex negligence, wrongful death, and related civil litigation. Steve is considered a specialist in all forms of criminal case mitigation including capital (death penalty) cases, Hurst resentencing. pre-sentencing in other criminal matters and juvenile (Miller) resentencing. Steve has participated in several thousand criminal cases in both State and Federal courts, including dozens of post-conviction relief matters. He continues to personally enrich himself by receiving periodic training in both civil and criminal investigative matters in the form of recognized continuing legal education credits.

Our professional and experienced staff is dedicated to providing you and your client reliable, timely and most importantly, accurate information.

In 1999, Steve earned a Bachelor of Arts in Philosophy and Legal Studies from the University of Central Florida, and is currently a Juris Doctorate Candidate at Barry University, Dwayne O. Andreas School of Law, Class of 2021.

His commitment to professional ethics and quality service make him an invaluable asset in our community.